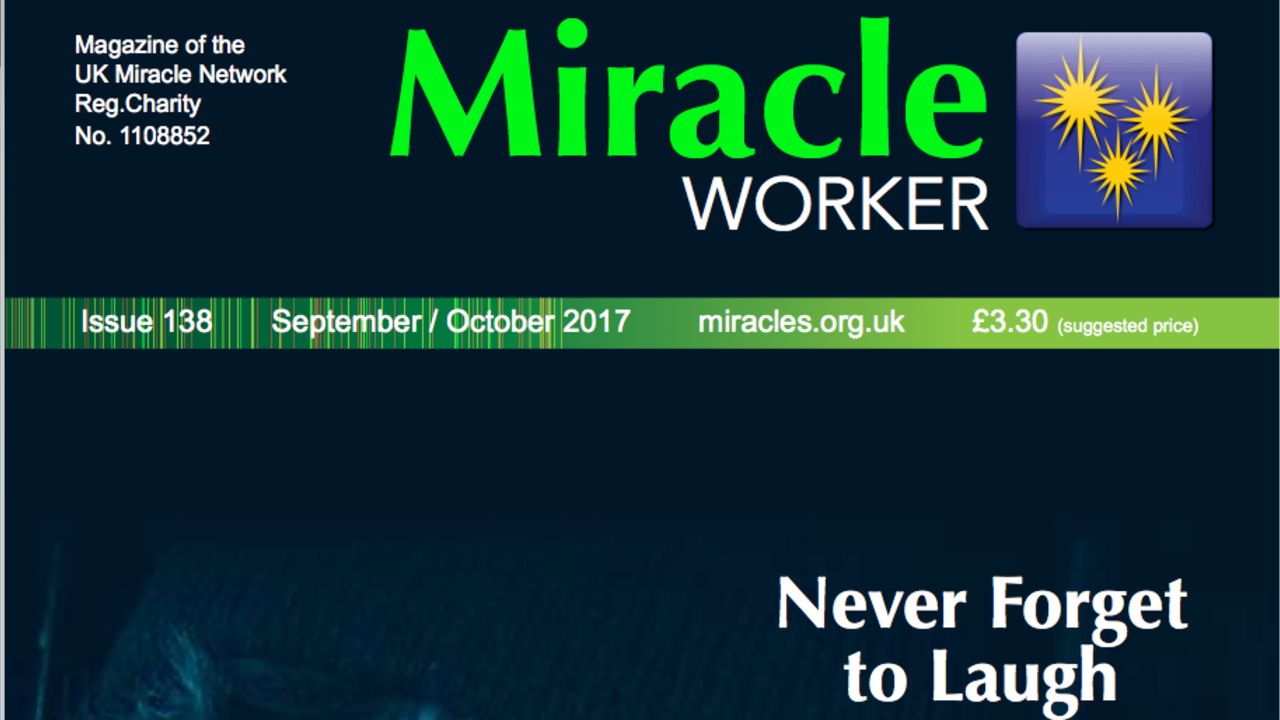 Well, how could I not say “yes” to writing an article since this is the title of my book about ACIM co-scribe, Bill Thetford! What an amazing, brilliant man he was, and unknown to many, a famous psychologist in his own right unrelated to the Course. Among his stories from Columbia, Bill delighted to talk about being co-editor of the Journal of Abnormal Psychology from 1965-1971, the years of Course dictation. He periodically rejected articles that were “not sufficiently scientific,” and of course, under the circumstances, found this situation ridiculous and very humorous.

Besides his legendary healing presence, Bill was known for his unparalleled sense of humor; he was hilariously funny with great wisdom and sanity packaged in dry wit. One of his signature lines, always offered with a big smile was, “I know it’s hopeless, just not serious!” He was able to joke about the hopelessness of finding ultimate satisfaction in our hallucinated world and how helpful it is not to buy into it, since deepest love and peace is always right here, right now, whenever we choose to release our grievances.

ACIM was dictated during the cold war era with the Soviets and “brinksmanship” was a word often used then. In his earlier days, Bill used to refer to practicing the Course as “celestial brinksmanship.” It asks that we take on faith a very different way of living and it seemed to him that he was plunging into the unknown, not knowing exactly what experiences the Course practice might be precipitating. Who really knew what this meant to see this world as a hallucination with another state more real? Humor enabled him to “take the plunge” more gracefully and by the end of his life, he experienced that “unknown” state and left this life experience filled with indescribable joy!

During the last ten years of his life, his close friends watched as he continued and deepened his dedicated practice of forgiveness. The late Hugh Prather remembered, “Well, I can tell you, everything about him was this deep connection with God combined with his advice not to take it all too seriously—one of the primary themes of Bill’s life and

the great gift he gave the world. Every conversation I had with him had an effect on me because I was taking the Course very seriously and you just couldn’t do that with Bill. I wish everyone could have felt his very lighthearted approach to the Course. Additionally, he just thought it infinitely amusing that the CIA had financed so much of their work, and he always joked about the typewriter—the CIA-funded typewriter that typed ACIM.” (Note - the CIA then did not resemble today’s version and Bill was never involved in anything other than personality assessment and research.)

Bill was aware of his own human frailties, but able to see through and not invest in them; he advised all who would listen to do the same, to laugh at their own judgments. As important as ACIM was for him, and

as dedicated he was to practicing, he still could witness the entire project from a distance and find it all amusing. He was never malicious with humor, often a thinly disguised cover for a put-down, laughing at the absurdity of life and finding nothing too sacred for his lighthearted touch. Predictably, when people started taking themselves or a situation too seriously, he became an impish, irreverent jokester, as if to say, “Lighten up, everybody!”

And he did practice what he preached. In the early 1980s, a woman who was writing a spiritually-based sex manual, which she believed was being dictated by Jesus, started corresponding with Bill to inform him about messages she was getting from “Jesus,” and asking for his commentary. Being a bit nonplussed and not knowing quite how to respond, he finally wrote her back after receiving several letters and said that he, too, had talked to Jesus, who told him they should not communicate for five years! Once again, this particular use of humor was not to denigrate the woman but to infuse a greater sense of lightheartedness into the situation. This was quintessential Bill.

The psychics also picked up this wonderful gift. One time a well-known “trance” reader, unknown to Bill, channeled, “You have a remarkable talent to aid you in this, and it is your capacity to draw upon the wit and the clarity of your own mind that stems from warmth and from your capacity to see a sense of the ridiculous in all that life offers. Use it amply whenever it applies and you will find that whatever you have to teach, this will be the tool that will aid you in the work that needs to be done.”

Even from “beyond the grave” Bill couldn’t keep his humor in check. In her capacity as his executrix, Pat Hopkins was responsible for the disposition of Bill’s ashes. Several weeks elapsed before they could be scattered over San Francisco bay, his choice, as persistent wind and fog made flying conditions hazardous for the low-flying aircraft used for such purposes.

Pat recounts, “I remember quite distinctly that it happened on a Wednesday. I got a call from the mortuary around 8:30am saying they were going to scatter Bill's

ashes, along with those of several others, later that morning. A chaplain would be on board to say a few words at the time of their release. Later that morning, around 11:30, I was in my kitchen making a tuna salad sandwich, Bill's favorite, when suddenly I heard his voice as clear as anything over my right shoulder saying, ‘Ash Wednesday, Pat!’ [Ash Wednesday is the first day of

the Lenten season culminating on Easter Sunday in the Christian tradition. Ashes are placed on the forehead as a symbol of mourning and penitence.] I burst out laughing; it was sooooooo Bill. I went right to the phone and called Judy (Skutch Whitson) who said, ‘Only Bill would think of something like that.’ and the two of us had another laugh/cry together. Bill always took himself very lightly; it was one of his very best qualities.”

He continued to be present after his transition. Two years after Bill died, as I prepared to move to Florida, people who are gifted at tuning into invisible presence would say, “Bill’s really with you” or “When you go to Florida, he’s going to be there.” Of course, we’re all always everywhere

so that’s hardly new news. However, I remember thinking that intellectually I could buy that, believed it to be true, but how nice it would be to have proof. I very much wanted a “sign,” something that was immediately recognizable. A few days later, I was having dinner with some acquaintances, and as our conversation progressed, I suddenly noticed I was talking like Bill, making puns in the same automatic and fluent manner, engaging in that same kind of word play for which he was famous. This really got my attention, not being a way I naturally speak.

Those people were not close friends so they couldn’t know this was way out of character, but I certainly did. I was thrilled as I recognized what was happening.

Within that same week, I was presenting an introductory ACIM lecture at the local Unity Church, one I have made countless times. Although I was covering the usual major topics, this time I heard myself presenting them in an uncharacteristically humorous way, using puns and playing with words. Concurrently with speaking to the assembled group, I was a aware of a gestalt of knowing, as if Bill were saying, “See, now you can know for sure I’m always here.” It was a very peculiar situation

- speaking in an uninterrupted, coherent fashion while receiving this real and powerful message in the back of my mind and no one knowing what was occurring. So on the eve of my next life-changing venture, I received that unforgettable message of assurance.

Periodically, during the writing of Never Forget To Laugh, Bill and I carried on a “dialogue.” Often I would “check in” with him about what should be revealed in the book and what would remain private – privacy not for him, but in consideration of others still living. I was dedicated to being truthful, yet respectful of everyone mentioned in the book. As it neared completion, I somewhat facetiously asked, “What’s the name of your book, anyway?” and distinctly felt the answer, “You’ll know when you get to the end.” I countered

that I was almost at the end - perhaps three pages left - and immediately got, “But you’re not at the very end and when you get there, you’ll know what it is.” Acknowledging that “almost at the end” is not the same as “the end,” I continued. With no forethought on my part, the last sentence of the book concluded with, “and never again will we forget to laugh.” Instantly the words jumped off the page and I knew that was the title of the book. This was definitely a collaborative effort and Bill had been coaching throughout. Apparently, he has also been coaching many others. I have heard from so many people who have read

his story saying they feel his presence, his guidance, his love for them specifically. And so it is - Bill still smiling, laughing, and reminding us all it’s not serious and definitely safe to “take the plunge!”